When it comes to the world we live in; there are certain truths that we want to ignore but cannot. We pretend like they don’t exist and try to hide it under the rug, but that just means they will resurface later on. Some people talk about, others create pictures of the sad truth of modern life.

Sometimes words are not enough to describe these sad truths. So below you will find illustrations of the sad truth of modern life that may give you a perspective of how much has changed and has not changed in this world. These images were created by illustrator Marco Melgrati.

Fantasy: When you watch a Disney movie with a storybook ending where a woman is treated like a princess by her prince, it gives women this portrayal that this is how they should be treated. The only problem is that this is not a fantasy and they think the lifestyle they see in a movie doesn’t cost real money. In reality, those lifestyles cost money that can sometimes lead to extreme debt! 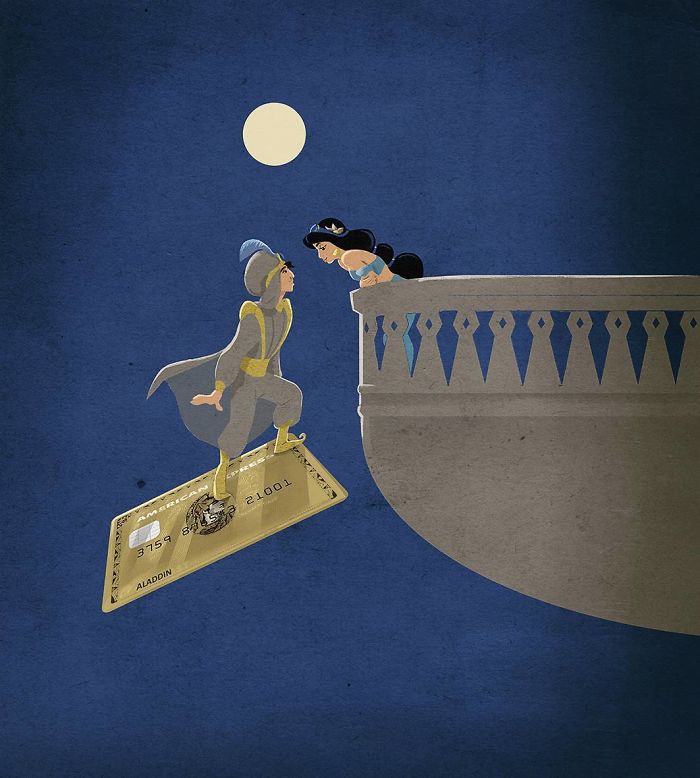 Trump Building a Wall: When the United States of America elected Donald Trump as their president, they knew what his agenda was. He blatantly told everyone he wanted to build a wall to separate them from Mexico. Whether he follows through on this idea or not is anyone’s guess, but the fact of the matter is that the whole premise of the United States of America is built on freedom. By building a wall, you’re taking away that freedom. 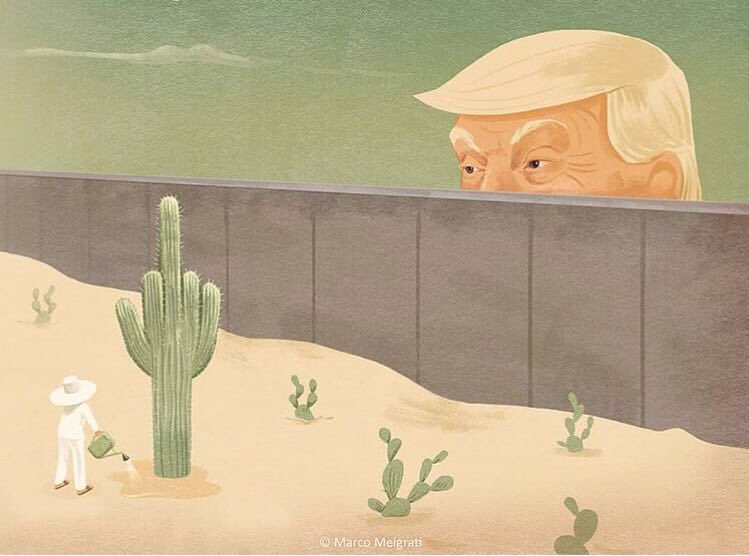 Fantasy vs. Reality: With all the Disney movies that come out and tell people that true love has fairy tale endings with prince charming, the sad, ugly truth is that many women are in abusive relationships and they cannot leave. But we are so keen on spreading propaganda that anyone can have a happy ending that we fail to point out the other side of a happy ending; an ugly ending. 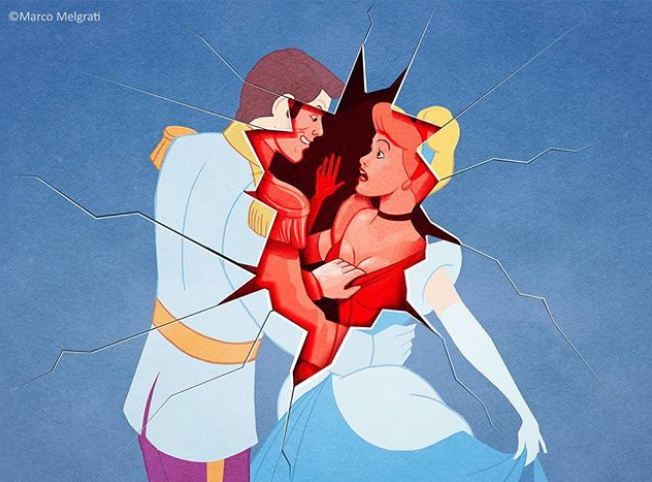 You vs. Your Mind: When someone says “take a look in the mirror and tell me what you see,” chances are they are not going to like what they see. The media has painted this picture they people need to look a certain way or dress a certain way in order to feel good. This has caused people to look in the mirror and hate what they see. A mirror is supposed to show you not what you look like, but what you’ve become. This also ties into the seriousness of mental health. People who are suffering from depression and anxiety cannot look in the mirror because it will only cause pain. 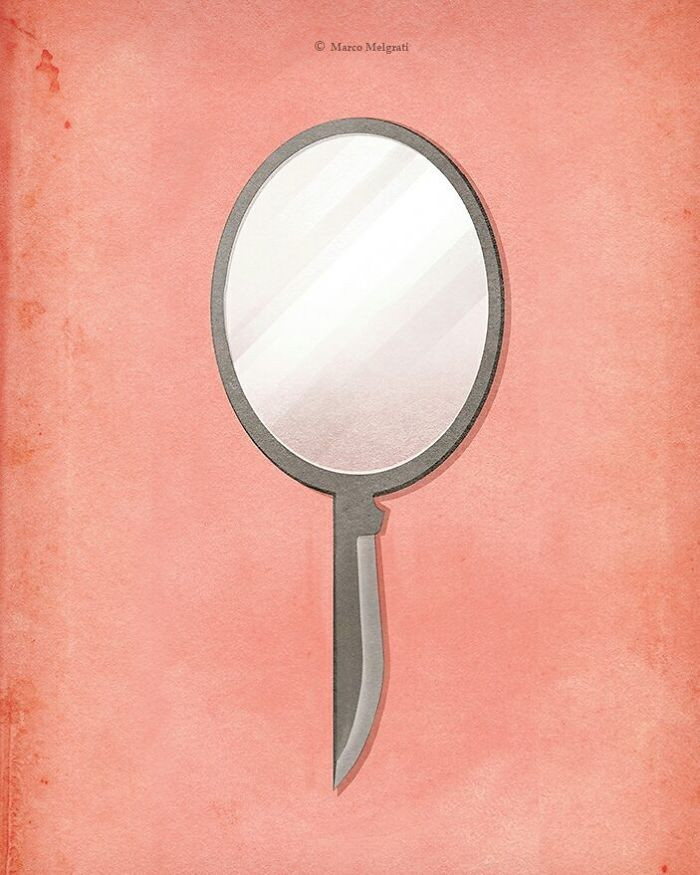 Capitalism Economy: Does anyone remember what real democracy looked like? Capitalism was one of the most positive ways to run countries back in the day, but eventually, the majority of countries switched to democracy so it could give a chance for everyone to flourish. Although the electoral system is still good from a democratic standpoint, the agendas of the politicians are surrounded by money. Every decision that is made revolves around how the rich can get richer. The amount of debt that the United States has accumulated is beyond repair in my opinion and that’s because there is not enough money being put into the country, but rather the pockets of the elite. 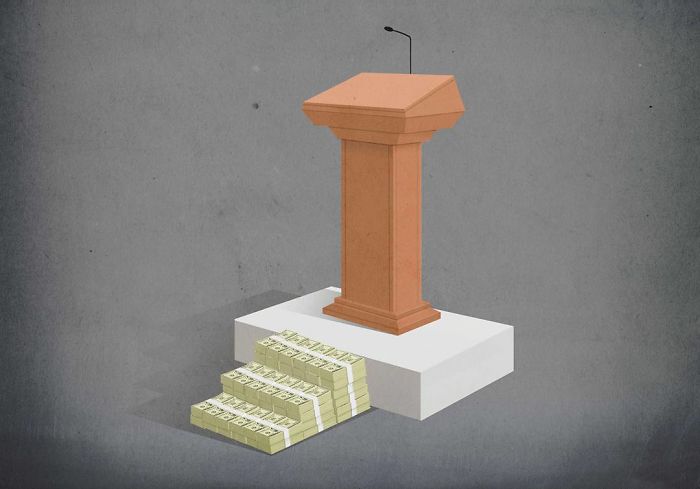 Gun Control: I know this is the most heated debate that is taking place in the USA, but gun crime has become a serious problem. The second amendment protects those who have obtained firearms the legal way, but the United States is now looked upon as a country that has a firearm issue. Unfortunately, this is correct; although this country is so much more than just a place with guns. But the sad truth about modern life in this country is that people do not feel safe with all the shootings that are occurring in schools. 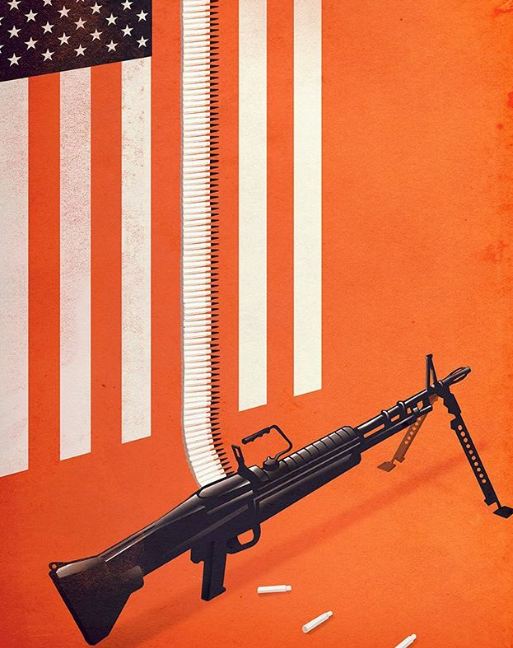 Freedom In Jail: I particularly like this image because it illustrates how corrupt the system can be. If someone commits a serious crime such as murder, they are put in jail, fed incredibly well, given a job in prison and also an opportunity to get seriously educated. Essentially they are getting everything people work for outside of prison—for free. 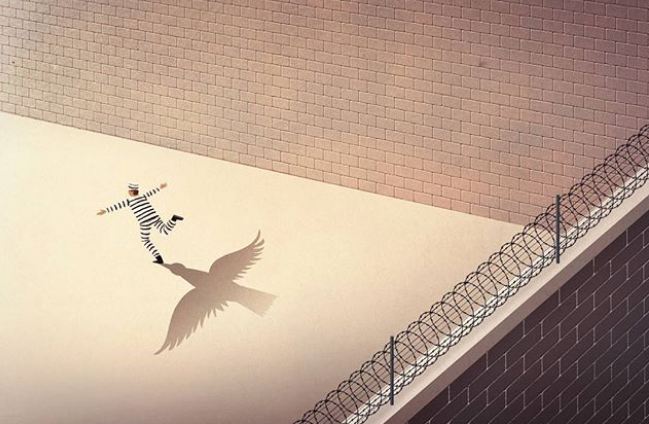 Social Interaction Is Dead: The invention of the Smartphone has caused people to stray away from social interaction. If you need to talk to someone, you text them or find them on social media. Do you remember what it was like to meet a stranger at a bar or at a grocery store, strike up a conversation and hit it off? Now everything is done online with thousands of dating apps. People don’t know how to take a compliment anymore unless it is given on social media. I’ve also noticed that when there is a big group of people in one area, at least half of them will be busy browsing on their phone. Our social skills are imprisoned because of this invention. 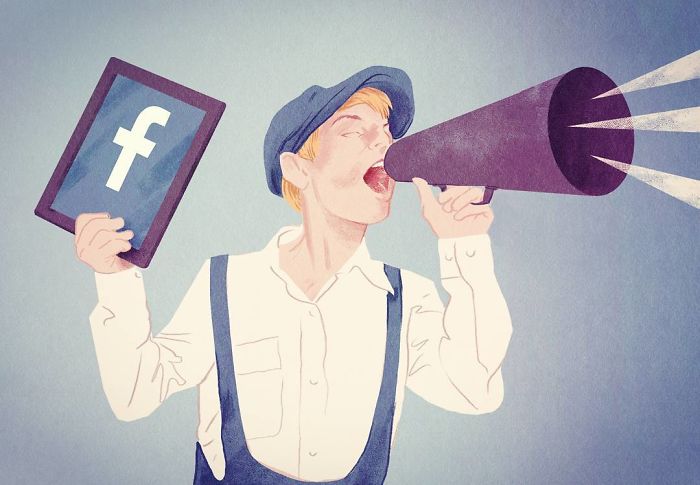 Go to the Bank to Lose Money: I thought that the place you go to lose money was the casino. But with the way the banks are giving out loans and credit card increases, the bank must be the place to lose money. Do you remember the market crash in 2008? Banks were giving out loans to people that they knew they couldn’t pay back, and it caught up to them when they couldn’t cover any of the debt that was accumulating. People who work at the bank get increases and bonuses when they sell a certain amount of bonds, loans etc. They may say that their primary concern is helping you achieve your goals; but a good chunk of those employees are looking out for themselves. 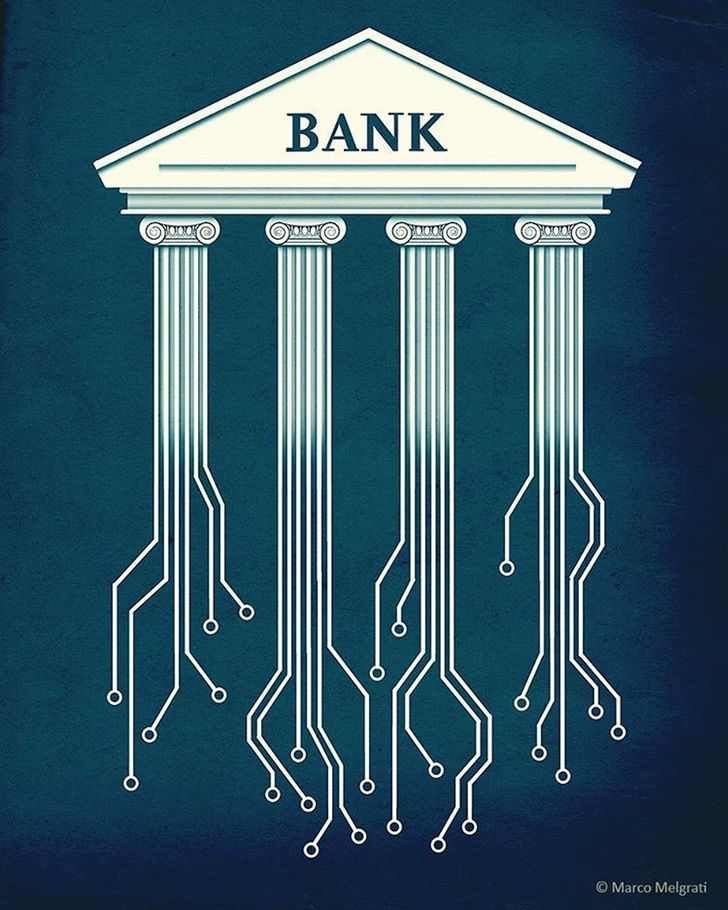 The Real Cost Of Health Care: Melgrati states in his Instagram that this piece, which he titled The Price Isn’t Right, was created for Neurology Now Magazine. The article is about how breakthrough drugs for rare neurological diseases are grossly expensive, and how that system leaves the patients who need it most incapable of accessing them. 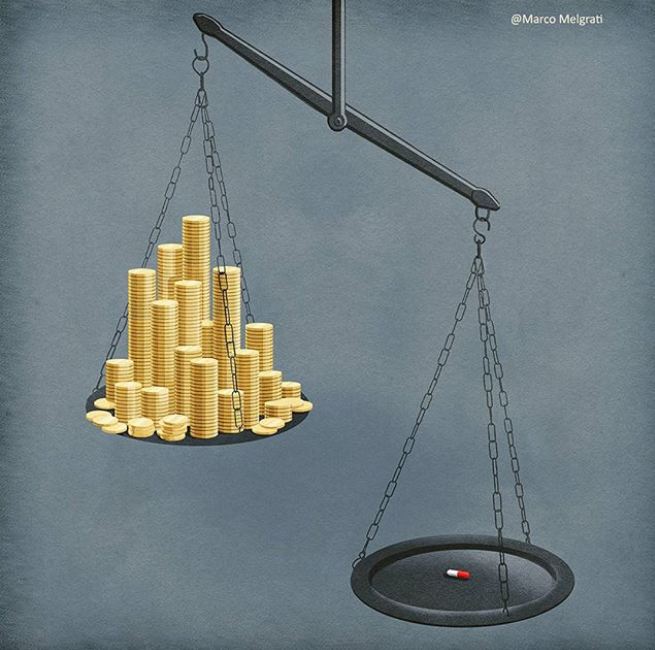 Instagram Trends: Remember when Instagram first was invented? People would post cute links to funny pages, maybe a selfie here and there. Now Instagram has turned into a pretty messy place. It’s unfortunate how vastly the modern day life has changed. But what is even more troubling is how some of the things that should have been changed are still the same. It’s difficult to change for the good, especially when it takes more than one person to inflict change. 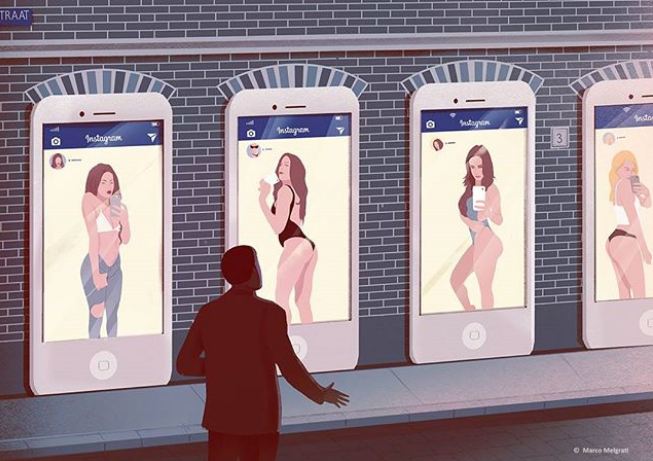 The Zoo: Humans do this to animals without even thinking twice. 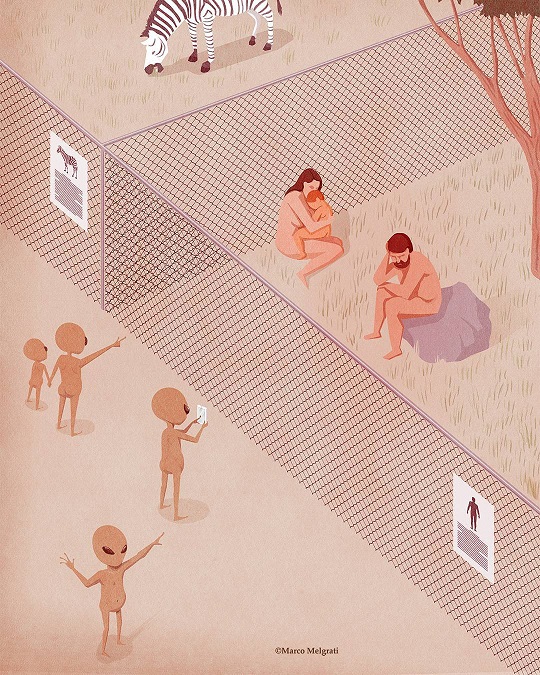