Home
Photography & Illustrations
Hilariously Honest Comics Reveal The Difference Between Having The First Vs. Second Child

The first baby is always special to expecting parents. The amount of care taken during pregnancy and while bring up the first kid is too high as compared to the second one. There are instances where a second child is loved and cared the most from the first one or where the first child feels neglected when the second one arrives, and most treat both equal. However here we are speaking of the care and caution that goes in during the pregnancy period and in the early period of the first child.

A woman expecting a first child always maintains a healthy diet and eats food rich in vitamins and minerals and everything that’s good for the baby, just to make sure the baby born is healthy in all aspects. Expecting parents take umpteen care in the hygiene of the surrounding atmosphere. The first baby is sort of sacred to them. They want everything to be right for their first kid. During first pregnancy, the mother eats and takes care of herself whereas in the case of the second child she is involved in the day to day activities and does her regular works with ease which is not true in the case of first pregnancy. Maybe there is a little bit of fear of the entire process of pregnancy and first childbirth and its experience which is all new, and when the second one arrives, the amount of fear and excitement which was there during their first child is not seen during their second child.

However, the reasons for not having the same amount of enthusiasm for the second one is unknown. Maybe the parents especially the mother expecting the second one know it all about the pregnancy and the way babies grow up and what’s right and wrong in the process of the Child growth. It’s just like they have already crossed these water before and hey we know this all, kind of attitude thy develop

Weng Chen – an incredible artist, VR game designer and a mom from China, currently living in the US illustrates the The Difference Between Having The First Vs. Second Child.

When you take care of the diet for the first one, and then you totally consider unimportant for the second one.

Hygiene during the firstborn is so important, but during the second born it goes for the toss.

Your excited about the first day of school for the first born but not for the second born, in fact, you are happy that you become free.

For the first pregnancy the treatment, the care received is much better than for the second pregnancy.

Firstborn always gets lots of new clothes whereas the second born has to adjust with the second-hand clothes.

Firstborn picture is framed and is almost all corner of the home, but for the second born…. keep searching folks!!! 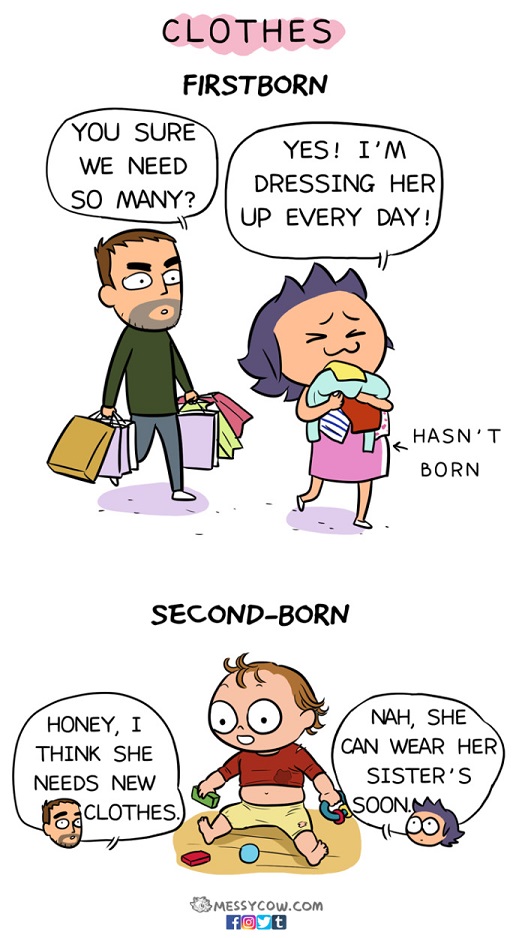 Just like second-hand clothes, the second born has to adjust with secondhand toys of the firstborn.

Firstborn gets the maximum of breast milk whereas the second one, the minimum.

This situation is faced by most of the parents. However, this nowhere is the picture of bias between the first and the second child. But yet this is the reality, and we all know it’s so hilarious when we look back.