Home
Entertainment
The Gem You Pick Will Reveal Your True Personality

People have believed in the power of stones for a very long time. They are hidden deep in the earth, which makes them connected to nature. This is probably why people believed that they can not only show your desires and give you the power to foretell the future but also reveal your deepest secrets. Would you like to try it out? Find a calm corner in your house, take a deep breath, and choose a gem. 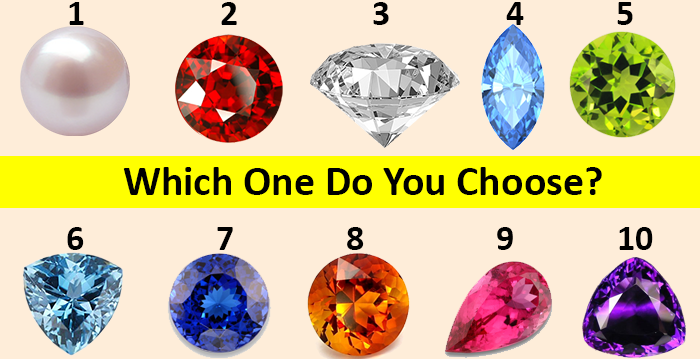 If you were drawn to the pearl, then you are a dignified, spiritual person with a rich sense of pride but a humble heart.

Though not technically a gemstone, the pearl is a special object that’s been valued and admired for thousands of years. Referenced in many religious texts, pearls have come to symbolize purity, charity, wisdom, and integrity. This means that you are calm and kind, and you always think before you speak. You are a true rarity.

In nature, the pearl represents transformation and endurance. After a lot of pressure and time, what was once a grain of sand becomes a radiant ball of beauty. Something has been wearing on you for a while now, but your transformation is near. Have patience. It’s going to pay off beautifully.

You were drawn to the ruby? Then you are passionate, intense, and bursting with life. You make waves wherever you go, and you greatly influence those around you.

Throughout history, rubies have graced the crowns of kings and the swords of warriors. Ancient legends claim that a ruby thrown into water would cause it to boil — and if pressed into a candle, a ruby would melt the wax. The ruby is seen as powerful, fiery, and filled with light — just like you.

Rubies are often worn as providers of energy, strength, and life force. If you’ve been fighting against something, and you feel yourself growing weak, don’t give up yet. The strength is within you, and your victory is near. Just look inside.

If your eyes fell upon the diamond, that means you are strong, determined, and proud. You give strength to those around you, and you glimmer in even the dimmest of lights.

In Ancient Greek, “diamond” translates into “unbreakable” and “untamed.” As the hardest naturally-occurring substance on earth, the diamond symbolizes great strength and resiliency. Given its transparent, reflective quality, the diamond also represents honesty. You are a kind and sincere person, and you’re willing to do whatever it takes to accomplish your goals.

Like the diamond, you are fearless and bold. Because of this, a new adventure is coming your way. You might be a little hesitant about it at first, but remember to let your light guide you.

You were drawn to the blue topaz. This makes you a calm, reflective soul who values the quiet moments in life. You attract people with your balanced and peaceful nature.

Your soothing energy and strong communication skills are valuable — and they’ll soon be needed. Put them to use, and you’ll be greatly rewarded — as will those around you.

Because you were drawn to the peridot, you are vibrant, energetic, and curious by nature. Your radiance and joy are a guiding light to those closest to you.

Peridots are shrouded in great mystery. No one knows for sure where the word “peridot” comes from, and the stones themselves are very rare; most have been found only on meteorites and in exotic mines. Because of their uniqueness, peridots are greatly valued. For centuries, kings and queens have worn peridots for their perceived cleansing, healing properties.

Don’t be surprised when an exciting new prospect walks into your life. Your glowing energy drew it to you. Go for it!

If you’ve been drawn to aquamarine, then you must be a spirited, adventurous soul. You are youthful, brave, and you glitter with passion.

The word “aquamarine” translates into “water of the sea.” Ancient cultures believed this gem was ruled by the moon, and sailors often wore it as a form of protection. In legends, aquamarine was a favorite treasure of mermaids, as it resembled hardened water. Because of its depth of color and reflective nature, it was often used by shamans to communicate with the other side.

If you’ve been feeling bored lately, do not worry. Your energy and pizzazz have drawn something incredible to your life. Just wait.

Since you were attracted to tanzanite, that means you are a sensuous, passionate person with sharp instincts. You have a beautiful, powerful aura that people are drawn to.

Tanzanite is incredibly rare; it has only been found in one place on the planet. Because of this, this stone is believed to have very special powers. Commonly used in psychic explorations, tanzanite is said to create a strong connection to the other side. Because of this, it represents connectivity, communication, and power.

Those drawn to this stone are very intuitive. Stop ignoring your instincts. You know they’ve never been wrong before.

Were you drawn to citrine? Then you are a bubbly, creative spirit with a true zest for life. You are warm, exciting, and always kind.

Taken from the French word for “lemon,” citrine represents freshness and zing. It’s said that carrying this stone can transform negative thoughts into positive ones. Anyone drawn to this stone is an upbeat person who values solutions and teamwork. You always come with new ideas and perspectives.

Dark clouds might try to blot you out sometimes, but don’t let them. Your rays will always shine through.

If you’ve been drawn to pink tourmaline, then it means you are a soft, sensitive, compassionate soul. You’re sweet and sincere, and you’re refreshing to those around you.

Since first introduced by Tiffany & Co. in 1876, tourmaline has been a highly-prized treasure. But before it was valued for beauty, it was studied for science.

Researchers noticed that by heating or rubbing the stone, the gem would become electrically charged. Attraction to this stone means you feel things very strongly, and you can’t help but react when touched.

If you’ve been waiting for a push or a sign, look no further. It’s time to make a move. You might be sweet, but you’re tough, too. Go for it.

You’ve been drawn to the amethyst. That makes you a vibrant, intelligent soul filled with quiet passion. You exude strength and honor, and nothing gets in your way.

The word “amethyst” actually translates into “not intoxicated,” and it was commonly worn during Ancient Greek parties to fend off drunkenness. Hailed for its soothing powers, the amethyst has long been regarded as a source of balance, wisdom, and sobriety. Like the amethyst, you radiate calm, control, and restraint.

You are a mother figure to those around you, but it’s your turn to let loose and have fun. Give in and let your hair down.